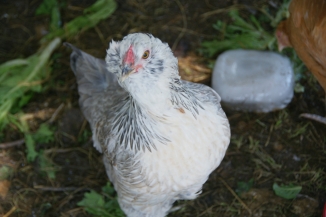 Which came first, the chicken or the egg? This ancient conundrum became clear here at Whimsical Moon Herb Farm on Saturday, August 13th, 2016. The morning dawned bright and sunny, a normal summer Saturday. I was going about my chores, as usual, when suddenly I heard an unchickenly chicken squack. In fact, it sounded more like a honk. And then another more elongated honk. And then garbled gobbling. What on earth?

I rushed to the girl’s coop, opened the attic and peered into the dim, straw filled interior. Prissy stared back at me, shook her feathers, then waltzed down the step ladder into the main chicken arena. And lo, the sun filtered in through the main attic window, and there it was. The first EGG! It was perfect.

We purchased 6 fluffy, tiny fuzzballs on April second of this year. They resided in their brooder for a short time. They outgrew it quickly and ended up living in our main bathtub until the middle of May, when they graduated to their personal coopacabana.  They thrived in their new digs, munching on fresh spinach and radish tops from the garden, layer pellets with added oyster shell supplement, and fruit and vegetable scraps from the kitchen. They got fresh water every morning with a splash of unfiltered apple cider to control bacteria and during the heat of summer, chunks of ice to cool off.

We have three Ameraucanas and three Buff Orpingtons and as they grew, they each developed their own distinct, mature colors as well as individual personalities. We realized they were getting closer to laying their eggs early this month as their combs and wattles grew and turned a brighter red.

As of this writing, we now have six delightful, whimsical eggs. We find we stop whatever we are doing, no matter what, as soon as we hear the chortly squack of a laying chicken and smile in anticipation of the next egg.

And so, in answer to the question: which came first? We can assuredly say, six fluffy chicks came first. For us, anyway. Here on Whimsical Moon Herb Farm.

Did somebody say omelet?

One thought on “The Chicken Came First…..!”

Leave a Reply to Donald May Cancel reply